Halloween: It’s Finally OK to Scare the Crap out of Your Kids

We jump through hoops to ensure our children believe a chubby dude in a red suit squeezes his fat-ass down the chimneys of homes worldwide giving out presents, but only to “good” kids.

We convince them Fairies with a dentin fetish will steal their teeth in exchange for cash WHILE THEY SLEEP.

There’s also the giant rabbit who brings eggs, candy and dollar store tchotchkes to celebrate Spring. Nobody ever explains how the hell he gets inside and why he doesn’t also leave monster droppings behind.

Some of us also want to make sure our children have a handle on the whole “higher power” thing. God, meting out punishments on sinful kids and watching their every move like an invisible stalker.

Angels watch over them too, ghosts of dead people who provide nebulous support in times of need. 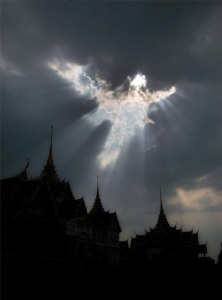 Then, Halloween arrives and we have to tell them that all things scary are totally fake. Ghosts, witches, trolls, ghouls and goblins.

You have to explain that they will encounter copious amounts of blood, but it’s not real.

Our neighborhood will appear to be bat-infested, populated by hoarders who have allowed spiderwebs to overwhelm their porches.

Children will be required to solicit candy by threatening to assault or insult the strangers who answer the door. Yay!

It’s a fine balance, getting your children to believe in intangible phenomenon and then turn around and be able to recognize other horrors as imaginary.

Fortunately, I hit the jackpot with my daughter.

Alma believes in angels and Santa, but understands that monsters don’t exist. She adores The Nightmare Before Christmas and has started telling us that there are ghosts everywhere.

She’ll tap her foot on the car door and proclaim, “It’s a ghost! There’s a ghost in the car!”

Unfortunately, my son has not mastered the delicate balance between enjoyable fear and downright terror. He starts shouting, “Ghost in the car?” “No like ghost in the car!”

Huxley notices the lights are out, says “scary!” and scrambles onto my lap looking over his shoulder.

I am notorious for accidentally terrifying my children.

I get amped up during severe storms and yell “thunder!” I made the mistake of explaining to the kids the real potential danger of being hit by a bolt of lightning.

I stressed the important of buckling up by warning them that they could be seriously injured if we get into a car accident.

(Hey, I work in news. Car crashes and lightning are a very real danger in Tampa!)

I went to play “dollhouse” with Alma recently and had to think fast for a motivation for my squirrel family arriving at her mouse family’s house.

Without considering the repercussions, my squirrel mom was pounding urgently on the door because the house had burned down.

Yeah, that was the storyline I chose for my daughter whose one fear is the smoke detector.

Thankfully, she was cool with it, explaining that “If your house is on fire, you wait until it stops and the steam stops and the water dries up and then you can live there… or just build a new house.”

For my daughter’s sake, I want to go as a creepy vintage doll for Halloween. 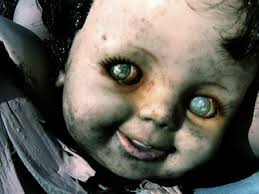 For my daughter’s sake, we started to watch Triplets of Belleville.

For my son’s sake, we turned it off before getting to the part where some raggedy-ass old bitches subsist on frogs.

I guess it’s enough that they hear the hushed sounds of blood-curdling screams from the movies I watch after I put them to bed.

It’s only a matter of time before they stumble bleary-eyed into the living room and encounter a serial killer clown and are scarred for life.