My dogs were relegated to second class citizens the very second we welcomed our daughter into the world.

What did we do with them while I was in labor?  I don’t know.

In the days that followed?  No clue.

Now that we have two children, the dogs are starting to look and act like dingos — or those
refuse-consuming street mutts in Chile.

They stare wild-eyed while we eat and cower nearby hoping someone will just touch them.  And they attack each other viciously whenever anyone knocks at the door. Nobody will ever try to break in once they realize my dogs are so dang crazy they’ll kill each other along with an intruder.

My Boston has Addison’s Disease. He’s on medication, but it costs more than $1 a pill. He’s supposed to have three a day, but c’mon. That’s expensive.  So, I’ve been skimping, giving him two  and hoping for the best.

I should’ve realized something wasn’t right when he started urinating on every single fake tree in the entire house.

We moved all the expensive fake plants upstairs.  Our downstairs is a barren desert.  Our upstairs (beyond the dog-proof gates), a veritable rain forest.

And then, we woke up to find a shimmering, soggy pile of presents on Christmas morning.  Ever try to peel a wet label off a bottle of beer?  Now, try to do that to dozens of presents for your kids and throw in the fact that it smells like dog piss.

My dog must REALLY hate “Santa.”

Turns out the excessive urination is just a symptom of his improperly-controlled disease. Back to three pills a day!

Don’t get me wrong, our dogs are still living the high life. They have comfy dog beds (that haven’t been washed in ages).  We feed them every day (when we remember).  And they always have water. (With dog hair and slimy, mystery dog goop stuck to the sides of the bowl.)

At least now they have a huge backyard to poop in.  And boy, do they poop!  If those piles were landmines, we’d all be dead ten times over at least.

When it’s about getting to work on time OR digging wrist-deep into a thin plastic bag that’s likely to rip the second you strain that poop away from the grass, I choose punctuality. 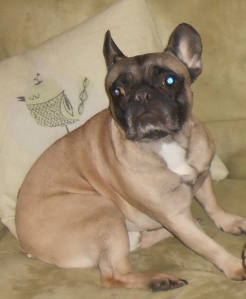 I recently elicited the help of our daughter to clean up the poop.  Don’t worry, I was the picker-upper.  She was the pointer-outer. That was a mistake.

My son has taken to soccer-kicking the dogs whenever they’re anywhere near him. No matter how many times we show him how to be gentle or sweet, he does the full wind-up and boots them in the face.

My poor Boston is nearly blind in one eye and the other eye isn’t far behind.  Yet, I still curse at HIM when I trip over him in the kitchen.  I can see perfectly fine, so why I am such a dick?

I adore my dog, and I will be crushed when his time comes.

I’ve just been too busy trying to keep two small human beings alive to be all that concerned about the hairy pieces of furniture that meander around the house hoovering crumbs.

Anyone who can guess very specifically what this is that I’m cleaning up, while my daughter screams “Mommy!” (because she needs three toys, not two,) will win a bazzilliongazillion dollars: