Adult Convo With a Toddler

For the first time last night, I attempted to have a deep, meaningful conversation with my 3 year old daughter. She’s been acting out, refusing to go to bed at night and having meltdowns at school.

Blankie MUST cover head, but not eyes and cover all toes.

I tried to casually and calmly asking her if something has been making her upset lately. She said no.

I said her the teachers have told us she’s been having a bad time at school and I asked if something was bothering her.

She said, “Zach bit me two times. But, that’s it. He doesn’t bite me anymore.”

I said, “Well, you also seem to get very upset about what you’re going to wear for the day. Like, when we tell you that you can’t wear a certain dress… ”

Me: “Alma, we just want you to be happy and it seems like things really bother you.”

Alma: “Look at the puppet on the shelf! What’s inside this drawer?”

It’s kind of like when I asked her the other day what she wanted to be when she grows up. Her response… “A mommy… and a pumpkin.”

I asked again last night just for shits and giggles and was met with a resounding, “LADYBUG!”

I might as well ask her opinion on the privatization of social security.

Needless to say, our heart to heart did not prevent another major freakout session at bed time.

She demanded a single braid using two rubber bands so she could “look pretty like a fairy.” When I told her no and shut the door, she transformed into some kind of shrieking beast. She seriously sounded like she was screaming in tongues. I expected to open the door to find her crab-walking across the ceiling, spewing green vomit.

My sweet girl has been swallowed up by a chupacabra, one with an insatiable desire for dresses, braids and milk after brushing her teeth. 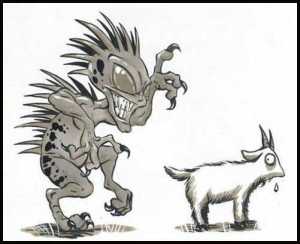 We’re at the point where we’re trying to teach her that you can’t always get what you want.

In turn, that means we can’t get what we want. (which is really just to watch Juan Pablo get chewed out by some angry Aztec-looking lawyer chick for saying, “It’s Okay” too much on “The Bachelor”. Lofty goals we have.)

Does anybody have a floral-print straight-jacket that doubles as a dress? (but with absolutely no purple… at least not today)

Alma requires me to surround her with 4 pillows. She calls it a circle. Afterward she said, “I’m so happy now I’m in my circle!” O… C…D.