Congratulations and Good Luck With That 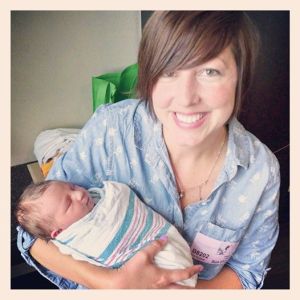 As I held my new niece for the very first time, I marveled at her perfect little face and how fragile and tiny she was. I was impressed by her full head of hair and the tiny lips already poised to smile in her sleep.

Then, I was relieved that she wasn’t mine.

Maybe it’s because the entire drive to Orlando, my children kept throwing their respective Spiderman and Hello Kitty balls on the floor of the car and whining that I needed to pick them back up.

The big mark in the middle of her head is a bruise she got when a kid hit her with a swing. She is not a Klingon.

Maybe it’s because my daughter wouldn’t stop yelling and waking her little brother up once he finally fell asleep.

Maybe it’s because my son threw a temper tantrum in the hospital room and started kicking me, then his Nana and then anyone in his general vicinity.

Or, maybe it was watching my daughter cower in front of her own family, melting into nothing because she was uncomfortable about the presence of a baby. She chose to peer out the window as if there was nothing more fascinating than the rooftop of the building next door.

Maybe it’s the dozen times this past weekend that I had to peel soggy undies over my son’s little legs. (along with a couple chunky poops) To say he’s regressed is an understatement. We’re starting from scratch. 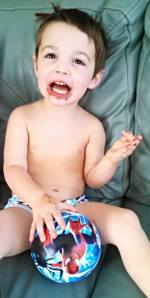 Maybe it’s the previous day when we made the mistake AGAIN of going to the beach. We chose a closer one, but that didn’t stop my daughter from complaining about the duration of the trip.

Once we set up our mobile beach home, it wasn’t the sound of waves crashing on the shore or seagulls that filled the air.

All I could think is THANK GOD I have a week off coming up for my birthday. My plan was to have several days of “me time” with stress free trips to the beach, naps and reading for more than ten minutes without passing out from exhaustion. Then, we were going to do our first weekend without the kids since they were born. Stay at a hotel with a pool, drink too much, sleep too much and remember how much we actually enjoy each other’s company.

We drop off the kidlets at my in-laws after the beach so we can grab a couple of adult beverages and drink off the feeling that having kids at all was a giant mistake.

The first thing my mother-in-law says is that they’re heading to Vegas to celebrate their anniversary… the weekend of my birthday when we were going to get away. I die a little inside.

While having drinks, I tell my husband that life will get easier once Huck gets potty trained and that all I need is several days in a row where I can really work with him.

Big mistake. Now, it looks like instead of a staycation, I will be cleaning up piss and shit for a week. Can I just work instead?

So, yeah… that new baby smell does NOTHING for me. I’ll just use baby powder.

The thrilling feeling of bringing another human being into the world? Been there, done that, twice.

Maybe I would feel differently if one of my kids had been a dud. Maybe we hit the jackpot of batshit crazy and annoying. Maybe we’re not strict enough. Maybe it wouldn’t feel so difficult if I didn’t have to wrap up a shitty weekend and head back to a wretched job.

I love my children, but they are the little sticks of dynamite that have blasted my biological clock. 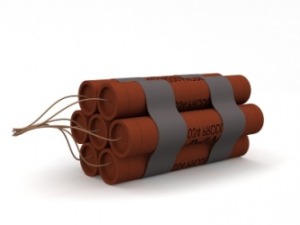 All that’s left are gears and cogs, tears and daydreams. 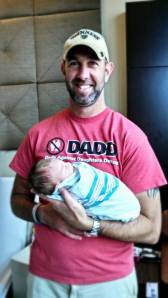 Congratulations to my big brother and his wife… and good luck with that.