I remember the first Champ Burger I ever ate from Checkers.

The fast food chain had just arrived in St. Petersburg and my mom stopped there while we headed to one of my brother’s soccer tournaments.

It’s not that it was anything amazing, but it’s a moment I relive if I ever have a Champ Burger now.

I can feel my legs itch from the summer grass, the sweaty hair tucked behind my ears and the tingle of the start of a sunburn on my cheeks.

The Filet-o-fish sandwich from Mcdonald’s brings back memories of trips to the dentist.

My mother used to reward me with them after every single trip to get cavities filled or braces tightened.

Now when I eat one, I can feel the numbness and struggle of trying to eat them after getting Novocain.

Subway was the food of choice when my father and I started doing Sunday lunch after my parents got divorced. I would get the 6 inch Cold Cut Combo and we would sit on a bench in a public park, talking awkwardly about the happenings in my teenage life. If I got that sandwich now, it would inevitably bring back the smell of the bread people would toss to the ducks nearby, something I did with my father even longer ago. 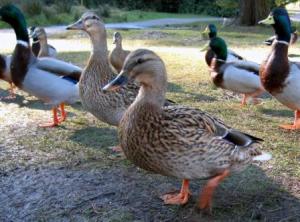 It might not qualify as fast food, but I would be remiss not to mention Coke Slurpees. While my first serious high school boyfriend introduced me to them, my relationship with this sacred beverage was solidified with the help of my then best friend, Marisa. We had a deal. When she came to my house to run through lines for plays (we were theatre geeks) she would bring along Coke Slurpees and Reese’s Pieces. I would return the favor when we rehearsed at her house.

Eventually Coke Slurpees were paired with Cheddar Cheese Combos on trips home after the beach.

Then they became how I survived pregnancy sans alcohol. 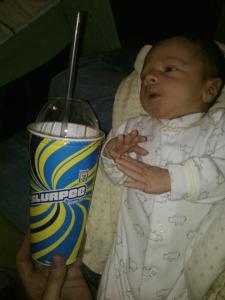 Comparing Huxley’s size to the Slurpee

Coke Slurpees are my crack. I don’t think I could ever give them up. I’ve tried.

If it wasn’t the worst idea EVER I would consider getting a Coke Slurpee tattoo. It’s the longest love of my life.

Also in high school, nothing compared to ditching for lunch and hitting up the Wendy’s with friends. Those ketchup containers are THE BEST.

Then, there’s my time in Miami, spent working the overnight shift in news, drinking an inordinate amount of alcohol and never sleeping.

We could call that my “Drunkin’ Donuts” period.

I once had a DD and showed up at the Dunkin’ Donuts on Biscayne all slovenly and ordered sloppily, “Can I have a ham, egg and cleeeeeese?” The employee rolled her eyes.

There is a point to all of my greasy, fattening, sugary reminiscing.

Why do we try so hard to deny our children these standout fast food memories?

Why are we so hell bent at keeping them from the joy of speedy, nasty goodness?

I know, I know… America is plagued by the morbidly obese.

We’re the embarrassing mu mu wearing midwesterners to the rest of the world.

But, they call it a “Happy Meal” for a reason. It makes… you… HAPPY. I’m referring to the old-school ones.

No kid has ever cheered for apple slices and milk.

Granted, my children are still at the age where they prefer to dismantle fast food so it starts to resemble the REAL food it was made with. Alma wants a slab of meat and a piece of cheese, not a cheeseburger.

But, whether it’s Pizza Hut after football games or Taco Bell for Friday the 13th movie marathons, just about everybody has a memory tied to fast food.

So, give your kid a cheesburger.

Give them a memory to last a lifetime.