Here’s my riddle. I am in desperate need of something that flies without wings.

Lately, I have found it increasingly challenging to manage my life with shrugs, snickers and snarky comments.

I’ve read articles recently about the curse of having a “Threenager.”

I have a Fournager. See? It’s not even funny because there is no word for a child who has gone from being willful to unmanageable and is also four.

I am bombarded with comments about how her stubbornness and crappy attitude will someday allow her to become a powerful, confident woman. It is of little comfort when I am currently tossing her “powerful” butt in time-outs all day long, every bedtime is a battle of wills and we’ve been forced to swear off all public outings. 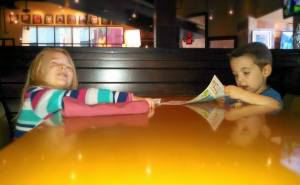 Don’t get me wrong, she still melts my heart by telling me I’m her best friend and randomly cuddling up to say, “I like you, mommy.”

But, lately, she’s destroying my life.

I can’t take a bath without the sound of her shrieking upon getting another time-out.

I can’t make it through dinner without her playing with her spoon, flicking her food to the dogs and shouting “Huck touched me!”

I can’t take the kids somewhere fun without her demanding a toy. Since when did it become a requirement to have a commemorative purchase when you go to a Jump Zone?

Huck is not absolved of all guilt.

The other day I heard them arguing about “who won” in the race to get upstairs. (They both say they won no matter who gets to the top first and then fight about it.) Moments later, I heard the loud smack of Huck’s hand across Alma’s face.

Even when he’s not pummeling her, she’s fake crying over something he did. 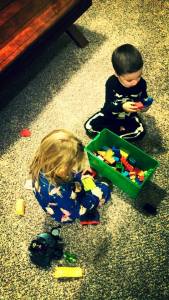 We refer to this as a “unicorn.” A magical, fleeting moment where they were playing without fighting.

When he finds out I’m not the one putting him to bed at night, he slaps the air and grunts. If I am in close enough proximity, he slaps me too. Another time-out! Yay!

I am sure every parent has been there at some point, but it feels like the kids are conspiring against us right now.

They’re determined to suck the joy out of every single moment of the day and let me tell you, my days suck pretty hard long before I get home in the evening.

Not to mention all the fun times involved with cool stuff like earaches.

I have tried so many different methods of discipline and parenting (Without spanking, can’t bring myself to get there yet.) to no avail.

The only explanation I can come up with is that they have so little respect for us because we’re… just… not… there.

We’re paying a hodgepodge of day care workers to raise our kids for pretty much the entire day, five days a week.

I can only wonder if I would find better ways to get them to behave if I was actually able to monitor their behavior, their food and their naps every day.

Maybe they’re eating too much sugary crap at school.

Maybe they’re harassed all day by whiny brats and no one is there to intervene, so they become whiny little brats when they get home.

Maybe they just don’t respect us because we’re just not there.

So, now on top of the misery of long commutes and long days at work and long and repeated time-outs, I am wracked with the guilt of feeling like a failure as a parent.

So, if anybody wonders why lately I’m not a font of hysterical anecdotes and amusing quips about my adorable family, that’s why.