Everybody knows that when you have children, they’re going to spend the vast majority of their youngest years infecting you with various germs and parasites. We’ve had several stomach viruses, the flu, RSV and of course lice. The day I had to put mayonnaise on my daughter’s hair and cover it with a shower cap was a goodie. We played together with our stinking Mayo heads and shower caps until her nap time. She woke up screaming when the warm mayo started to drip down her neck.

What nobody warns you about is the possibility your kid could give you a potentially deadly virus. My daughter came home from daycare with MRSA (Methicillin-resistant Staphylococcus aureus) on her arm. Then she came home with it on her butt … then it came back on her butt again and again and again.

Inevitably, I got it. But, I got it on my nose. Really? I ended up looking like Jimmy Durante or Gerard Depardieu (or as I call him, Gerard Depardicknose)

Eventually, it cleared up with antibiotics. But, then I got it again on my thigh. Any working parent knows how this story goes: I ignore it because I can’t call out sick, because I already call out sick way too much and I don’t want to get canned, so it festers and grows and suddenly I am waking up in the middle of the night with a dangerous fever, chills and an infection that has spread from my groin to my knee cap.

I went to the ER, assuming I would be sent home that night. When the doctor pulled my dress up over the wounds, he was taken aback. I spent two days in the hospital alone.

My husband would come and visit me, but he had to take care of the kids. The food was inedible. (Thanks Michelle Obama. I drew the line at the unsalted Saltines. How is that even possible?) 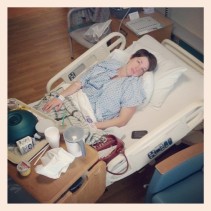 They kept me in “quarantine” and used words like “decolonized” and “carrier.” They once neglected to bring me my dinner because the nurse didn’t want to come in because I was CONTAGIOUS. People at my work were freaked out. The boss had to hold a special meeting to alert everyone about an anonymous employee with MRSA. Like there was any doubt about which employee that was. For several days after I returned, people would joke around and tell me to stay away. It wasn’t Leprosy for God sake!

The best part should’ve been leaving the hospital, but it was sweltering outside. A young, inexperienced nurse was tasked with wheeling me all the way to my car. The older nurse told her emphatically not to let me get up and walk. Lil’ nurse got lost and ended up wheeling me around in the heat, sweating, with my hairy hospital legs exposed in the cut-off shorts my husband brought me to change into.

I finally just got up and told her, “I won’t tell if you don’t.”

I was supposed to be convalescing at home. Instead, I came home to about a week’s worth of laundry. If you have a family of four or more, then you know what that means. A pile of clothes so high, climbing it could make someone’s bucket list. No rest for the weary. No rest for a working parent, not even one with MRSA.